Get $25 OFF your first service with Quick Catch with the mention of this ad. 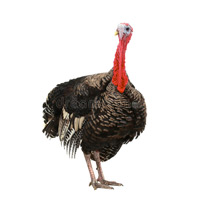 Nuisance birds such as turkeys may not be a common problem, but any species can become a pest and turkeys are no exception. Quick Catch can resolve any bird issue, from sparrows in a dryer vent, geese on the lawn, an aggressive wild turkey, to the most common pigeon problem.

Call Quick Catch to get a handle on your turkey issue and we will clearly explain what technique will work best in each case. Once turkeys are gone from problem areas we will clean up repair any damage.

If turkeys take up residence on lawns or public spaces and become nuisances, call trained Quick Catch wildlife specialists to handle the problem. Turkeys may become aggressive and attack people who are not certified to deal with wild animals. Our technicians have the proper tools and knowledge to handle any infestations humanely.

Where Turkeys are Typically Found

Wild turkeys primarily live in forested areas. They favor hardwood forests, as well as woodlands mixed with both hardwood and coniferous trees. Their preferred habitats are often interspersed with open pastures or fields, as well. Turkeys can even be found in swamps.

Turkeys differ in appearance according to sex. Males, called gobblers, are covered with iridescent feathers that range in color from brown and red to bronze and gold. They also have characteristic red wattles that dangle beneath their chins, fleshy flaps called snoods that adorn their beaks, and prominent tufts of feathers that protrude from their breasts.

Female turkeys, on the other hand, are known as hens and have duller-colored feathers and less distinctive features than their male counterparts. With an average weight of 5 to 12 pounds, they are also significantly smaller than male turkeys, which tend to weigh between 11 and 30 pounds.

How Turkeys Typically Cause Nuisance

As people are major predators of the bird, wild turkeys typically do not venture into areas of regular human activity. However, turkeys that are raised by people and then released into the wild do not have the same wariness as wild birds. Pen-reared turkeys will in fact roost on roofs of homes, in ornamental lawn trees, and on decks or porches. It should be noted that raising and releasing turkeys is illegal.

Wild turkeys are frequently found in crop fields given their diet of various nuts, seeds, vegetation, and insects. Typically, their presence on farms is beneficial because they eat harmful insects and weed seeds.

Pen-raised turkeys cause the bulk of problems for other poultry and humans. Turkeys raised in captivity and then released into the wild can carry diseases that wild turkeys and other poultry aren’t equipped to fight off.

They are also acclimated to human interaction and may become aggressive, chasing adults, children, and household pets.

Both pen-reared and wild turkeys may cause traffic issues by standing, walking, or pacing on busy roads and highways.

Simple steps can be taken to avoid wild or pen-raised turkey interaction. First and foremost, never raise turkeys to be released in the wild. Don’t feed wild turkeys that venture onto lawns as this only encourages them to roost or become aggressive. Keep areas around bird feeders clean as the seed litter will attract turkeys. Finally, protect gardens and crop fields with netting or fences.

If you are having an issue with turkeys or need repair or an estimate on intrusion prevention services, Call 904-859-6585 to speak to a Quick Catch representative, or Contact Quick Catch to get your problem resolved.