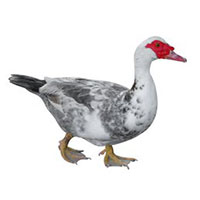 At Quick Catch, we catch and remove a variety of birds including muscovy ducks.

Muscovy Ducks are usually classified as a pest species due to their aggressive nature, their droppings, and their tendency to destroy lawns.

The most common complaints against muscovy ducks are:

Because certain federal laws protect migratory birds, the opportunities for dealing with Muscovy ducks have been narrowed down to a few viable options.

The most effective way to decrease the muscovy population is to render the eggs sterile after they have been laid in the nest.

Muscovy Ducks are usually classified as a pest species due to their aggressive nature, their droppings, and their tendency to destroy lawns.

The most common complaints against muscovy ducks are:

If you are having trouble with muscovy ducks, call 904-859-6585 to speak to a Quick Catch representative and we can help resolve your duck problem.

Where Muscovy Ducks are Found

Muscovy ducks do not traditionally nest on lawns or enter manmade buildings. However, their diet of small fish, reptiles, crustaceans, insects, millipedes, termites, and the roots, stems, leaves, and seeds of both aquatic and terrestrial plants may occasionally lead them onto privately owned property.

As Muscovy duck populations grow quite rapidly and easily become territorial, their presence in public parks can be dangerous to humans. Particularly when they become accustomed to being fed, they will chase and attempt to bite people at random, which endangers children especially.

Additionally, Muscovies pose several health threats. For one, their droppings often get into water supplies and seriously affect the quality. For another, Muscovy ducks are known carriers of the avian influenza virus, which can be fatal to both the ducks and humans who contract the disease.

When muscovy ducks get overpopulated in an area, trapping and removal is the most effective way to rectify the problem.  Restriction of feeding is imperative for successful capture and removal. Since most problems arise when the ducks feel entitled to food from humans, putting a public ban on feeding Muscovy duck populations significantly reduces the threat of attack. Property owners worried about the ducks venturing onto their privately owned land can eliminate standing water and erect fences around sources of vegetation, like gardens, to reduce the possibility of encountering Muscovies.

Muscovy ducks are wild animals that can carry fatal diseases. Untrained individuals should not attempt to trap or remove the ducks from public or private spaces under any circumstances. Hire a professional that is familiar how to properly handle the removal of these birds like Quick Catch.  Quick Catch has a state of the art remote control drop net system we use for the most effective trapping and removal of large quantities of ducks at one time.

Caruncles are a major distinguishing Muscovy duck characteristic. Usually only present on males, caruncles are fleshy, red, warty bumps that cover the area around the eyes and extend to the base of the bill. Muscovy ducks weigh anywhere between 10 and 15 pounds (4 and 7 kg), and males are typically larger than females. They may appear solid white, solid black, or mottled, with males featuring an iridescent green or purple sheen to their feathers, unlike females of the species. Muscovy ducks also have long, flat tails and large claws.

If you are having trouble with muscovy ducks, call 904-859-6585 to speak to a Quick Catch representative and we can help resolve your duck problem.