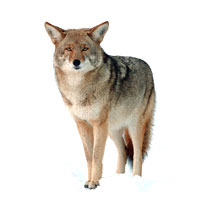 The Coyote is not a large animal. They are relatively three feet long and 20-40 pounds and are typically grayish-brown. Coyotes are nocturnal and eat a wide variety of foods, and will often scavenge for food. Coyotes are very adaptable to their living environments. 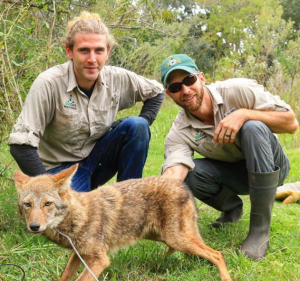 Coyotes are known for raiding chicken coops and killing poultry, as well as other domestic animals or pets. They usually will aim to avoid humans but it is possible if they are hungry or afraid they may attack. Coyotes attacks on humans are very rare.

When coyotes become habituated, hazing can reinstill the natural fear of humans. Hazing entails using a variety of scare techniques to teach a coyote to regard people as threatening and stay away from them

What are ways to Control a Coyote Population?

Yes, Coyotes can carry rabies, just like any canine.

Coyotes have only recently become a pest because the coyote population continues to explode while their territory is getting smaller and smaller. What does this mean for the interaction between coyotes and humans? As the coyote’s habitat gets smaller and their population grows, they have to live by humans to get food and shelter. The coyote is the size of a medium sized dog, but much smaller than a wolf. Their coats can range in colors, but the usual coat color is a tan, gray white mixture. You can tell a coyote from a dog because they are very skittish of humans and they are much skinnier than the average dog. The howl of a coyote is unmistakable and very annoying as it sounds like a baby crying or a dying animal.

Coyotes removed from the First Coast of Jacksonville »